Thirst for truth, not sensationalism.

Thirst for a higher truth. It offends me deeply how Yoga has become big business. You may have heard me say this before. You may be clueless to what I'm talking about, because big business, commercialism, and capitalism is such the norm you don't see it for what it is and what else there has been.

It offends me when I know I'm impacting a classroom full of students weekly and I hear that a capitalist above me in the chain is saying "I'm concerned I'm not making enough money off of this."

Probably in part because I've been doing yoga for 9 years and don't feel the need for the rhetoric distinction in the mundane world anymore, in part because commercialism has defined "yoga" into some money making commodity, my reaction now to hearing "yoga" used in it's various ways, namely a form of physical exercise with stretching, my mind goes to the question "What is yoga?"

It offends me on a larger scale that big business owners, these studio owners, are bogarting "yoga." The noice of this commercialism draws attention farther away from the esoteric or profound origins of Yoga. It makes it harder for instructors/teachers to do their thing and share their messages when we look to brand names and National Yoga Alliance for credibility first instead of first opening to the message itself. being drawn and compelled by the sheer thirst for truth.

This applies to lots of various businesses including massage establishments. The owner or leasee of the brick-and-mortar, that owns the brand name they post above the doorway are making money off of the instructors, therapists, service providers, that operate within it. Maybe there isn't much profit. Maybe the costs are too high and the business just isn't done right. Maybe the audience doesn't value it enough with enough capita/money. We need to wake up and realize the way we're doing things doesn't work. In whatever way it is, when you awake to what is wrong, what is dysfunctioning, and rise up by your own volition to take change starting within yourself, this is an expression of Yoga. Thirst for a higher truth.

Yoga stretches for lower back pain. 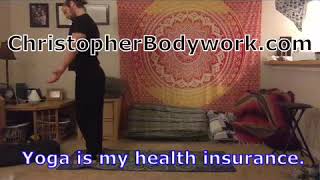 Yoga is my health insurance.

How are you moving with your New Year's Resolution?